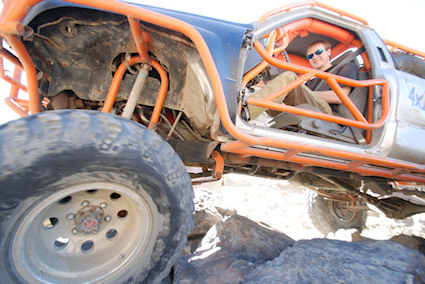 When the owner of 4x Innovations, Adam, embarked on his first ever truck build, a wrecked 1987 4Runner, dubbed Junior, he knew it would be a big project, but little did he know just what that project would turn into. The then wrecked 4Runner was rebuilt entirely in his parent’s driveway. During the build it was apparent that some of the parts needed just weren’t available at a price, quality, and look Adam wanted. At this time the build took a new turn to learning new fabrication skills. Soon a tubing bender, notcher, and other tools arrived in the driveway, amazing friends and neighbors. Once the truck was “finished” (they never really are, are they?) and the wheeling began, people took note of the work done to this vehicle and started asking who made the unique parts.

That great build and humble beginning grew into what is now 4x Innovations. After 3 years in aerospace mechanical engineering, Adam realized a dream and took his growing hobby and turned it into a full time business, moving into a small shop. Again in August 2007 4x Innovations expanded into a new, larger facility where there is plenty of room to grow with their customers. From day one the focus has simply been to make a good quality part that functions as needed, has a clean look, and has a fair price. The attention is in the details, and listening to what you, the wheelers want is just one of those details. Adam regularly takes customer’s responses and requests, integrating those requests into product upgrades and new products. He is always trying to push the envelope of what can be done, and come up with a new way to solve problems. When you place an order you’re sure to be getting not just a part, but the whole package of care and service that part needs to go with it.

Be sure to stop over at the 4x Innovations web site and poke around. http://4xinnovations.com

Providing great parts is just one of Adam’s passions. Adam holds a degree in Mechanical Engineering and enjoys problem solving. In the time not spent building trucks and parts he enjoys snowboarding, traveling, and exercising some creativity designing and running entertainment lighting systems for local bands and other venues. His travels take him to several different events throughout the country, so keep an eye out for 4x Innovations at your next local event.